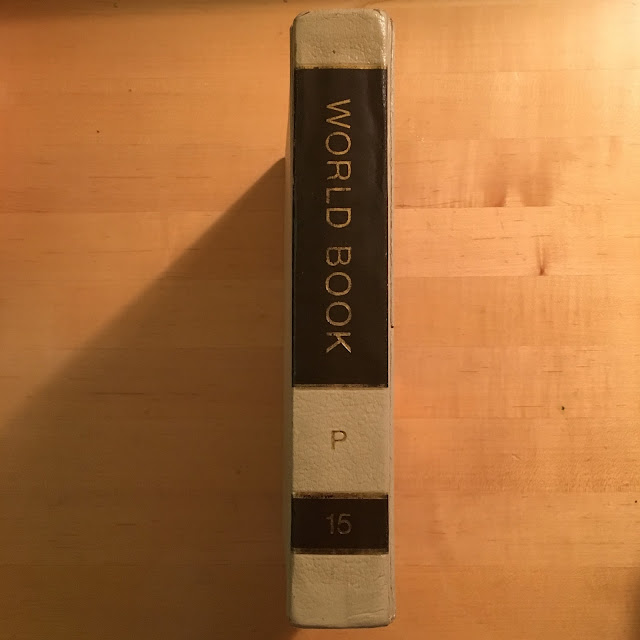 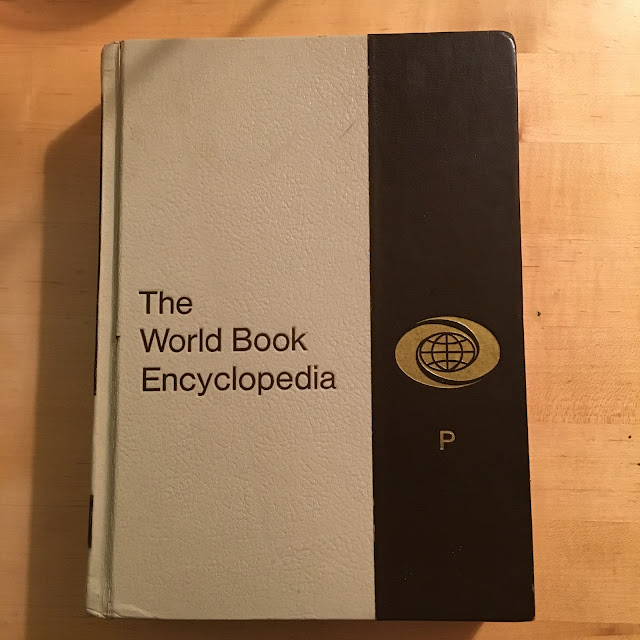 I can safely say my obsession with art comes from the PAINTING section in this volume, pages 26 to 77. I'd flip back and forth through this section for hours, poring over the images, reveling in the captions. Years later, on visiting MOMA, there they were, these iconic paintings hanging larger-than-life before me. Amazing!

Recently, I felt a wave of nostalgia to see my long-donated P volume again. I went online trying to wrestle it from eBay sellers insisting on selling the whole set. I was eventually able to buy this musty copy for $10.

On arrival, it needed a good sponge bath and quarantine in a plastic bag with bicarbonate of soda to try and remove the mildewy smell from years of neglect: 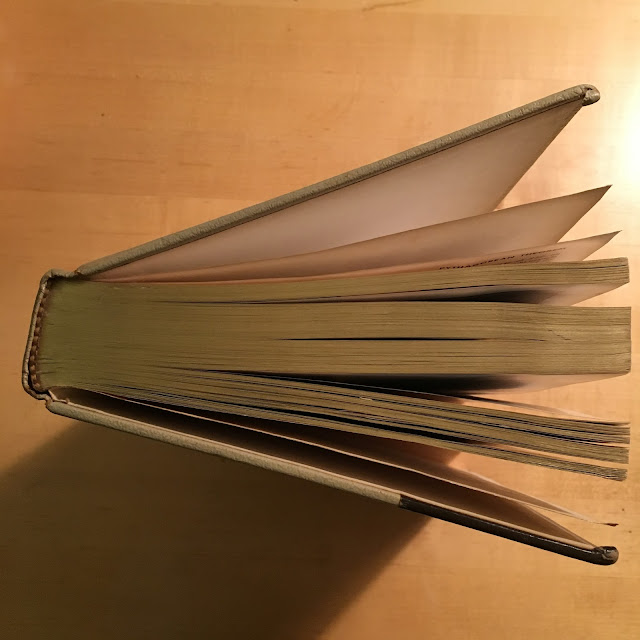 The musty smell remains. But I sat down with a tingle of excitement and nostalgia as I turned to page 26.

The first painting that ever captured my attention was Return of the Hunters by Peter Breughel the Elder. I even bought a $10 poster of this image as a kid, and hung it on my bedroom wall. It was popular - I know several people who told me that had that very same poster hanging somewhere in their childhood home. The panoramic perspective is captivating, jettisoning the viewer from their suburban nowhere to somewhere far off and blanketed with snow - snow I'd never seen growing up in suburban Sydney.

Next page: Chagall. What kid didn't stare at this trippy shot of a man floating to kiss his beloved as she ran in explicably towards the window? I could feel the air under my feet as I followed his feet, mentally floating myself up and over, wondering how my neck could bend at 270 degrees, and how she could run towards the window with those tiny, tiny feet...

Flipping past the more solemn, classical works, I spent a lot of time gazing at the Picassos.  In Mandolin and Guitar, I wanted to go behind the shape-shifting instruments to see more of the sea, and feel the warmth of those terracotta tiles under my bare feet. Seated Bather made me want to stick my hand through the spaces between those orbs of stone-like flesh. Staring at the spaces in Picasso's abstractions felt like I was Alice peering through Looking Glass - like most kids, I loved to fantasize about portholes, wormholes, trick mirrors and secret swiveling doors you could step through into an alternate universe.

The caption of Albert's Son in an Andrew Wyeth painting had me obsessing about "Modern Egg Tempera" - my juvenile mind fixating the crumbling yolk of my breakfast boiled egg being spread on a palette with paint.

While I was drawn to modern art, the shiny reflection on the nose of this Rembrandt fascinated me: how did he do that? I touched the page over and over, trying to feel the skin of his nose coming through the page.


Despite being a budding modernist, I was drawn to frescos and illuminated manuscripts, particularly this Giotto:

... and the groundbreaking perspective of this Fra Angelico:

El Greco disturbed me, especially when I scared myself silly reading Revelations in the Bible and associated it with this image:

Raft of the Medusa also haunted me;  I had recurrent dreams of flying over this doomed raft suspended by a giant raptor and with the aid of ropes and unseen hands, whisking all the occupants to safety.

In Seurat's pointillist masterpiece I imagined the figures fashioned from spray-on stone:

Henri Rousseau's Sleeping Gypsy was my all-time favorite. Utterly mesmerized by the toes of the sleeping man (woman?), the warped guitar and strangely 3-D stripes on the gypsey's uniform,  I'd read the accompanying text over and over and over, wanting to climb into that scene - but with no idea what I'd do if I got there:


Rousseau had one of the most unique styles in the history of art. He painted dreamlike, mysterious scenes that resemble surrealistic paintings of the 1920's. The Sleeping Gypsy illustrates the remarkable individuality of his style. In this painting, Rousseau created a sense of haunting mystery by placing the sleeping figure and the lion in a dreamlike landscape.

(Aside: Rousseau was actually considered a schmuck by critics, only to be hailed a genius much later - thanks to his pal Picasso, who recognized his talent).
For a high school art class exercise I reproduced, stroke for stroke, Kandinsky's Little Pleasures No. 174. The point of the exercise was to "get into the head and hand" of the artist, much like writing in longhand whole pages from Hemingway. I never felt my writing or painting improved using those techniques, but I did start to hallucinate that I was falling headlong into the Kandinsky and swimming amongst his "little pleasures."

Duchamp I never really cared for, but Stuart Davis I adored, probably because the style of "The Barber Shop" resembled cartoons on TV:

And Dali - what kid wasn't freaked out by the Surrealists: Dali, Magritte, Miro with their weird  doorways, drippy clocks and dark shadows:

As if to challenge my pre-teen brain, a Grant Wood appears beside Kooning's Woman, I. The two could not be farther apart. I saw little merit in De Kooning's Woman I, which seemed not that much different from a finger painting by a kid two grades below me. To this day, I'm still not a fan of de Kooning, but I admire his auction estimates.

Edward Hopper's Night Owls is another crowdpleaser, and my first glimpse of that far off place called New York. I had a dark, lonely view of New York for many years after seeing this painting.
I found Larry Rivers'  Forty Feet of Fashion totally baffling: The figures fall into a "shaped canvas" and remind me of the dioramas I made at school in shoeboxes:


And finally, the minimalist guru himself, Frank Stella, with Jasper's Dilemma. This pair of paintings channeled the color and black and white TVs scattered around my parent's house.

I could go on and on. But now, when I flip ahead in this volume, I see there are a ton of other topics  right up my alley: PLANET, PLANT, PHOTOGRAPHY, PERU and, wait for it  ... PRESIDENT OF THE UNITED STATES - circa 1977:


What can I say? My P Volume, musty and yellowing, was ten dollars and a hundred colorful memories. So don't toss out your musty set of encyclopedias so fast. Between swiping and Googling on your smartphone, I urge you to sit down with a random volume and start turning pages. You never know where it will transport you in 30 years time...

On not getting hammered: My first auction experience at Philips de Pury 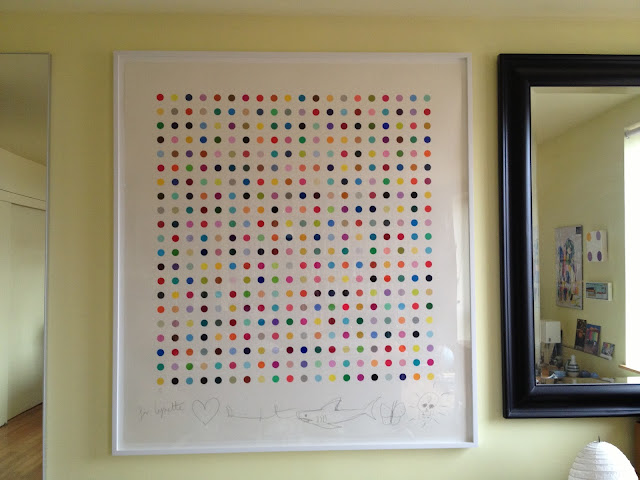 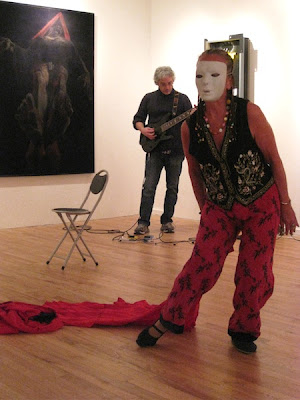