Showing posts from December, 2009
Show all

Renegade Cabaret on the Highline 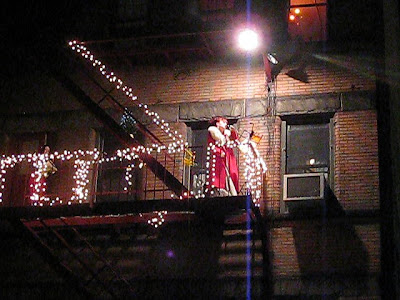 New York never fails to redeem itself" - E.B. White in "Here is New York" A lot as already been written about the inhabitants of an apartment that rubs railings with the recently opened Highline Park in Chelsea . You can google "Renegade Cabaret" in the blabosphere and land on their Facebook page, webpage and a lot of citizen cyber-ink. Prior to the $152m, "no binoculars needed" viewing platform unrolling outside her window, it appears resident Patty Heffley "lived in obscurity for 31 years in her building on West 20th St", sashaying from bathroom to bedroom without having to duck 'n' run in a towel as you do, and ecologically hanging out her laundry on the exposed fire escape without hassle. On June 9, 2009, things changed, when this soon-to-be world famous public park knocked on her window box. Her sporting response was to grab a couple of friends with talent, string out the paper lanterns and put on a show. Since the
Post a Comment
Read more
More posts